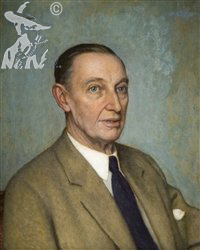 First met the Knights ion 1914 in Cornwall and from 1919 became very close lifelong friends of the Knights.

Barry Jackson directed the Malvern Theatre Festivals from 1929 to 1937,
In 1913 he became founder of the Birmingham Repertory Theatre. In his lifetime he was also appointed Director of the Royal Opera House, London and Director of the Shakespeare Memorial Theatre Stratford on Avon.
Barry Jackson also directed many
plays at the Old Vic Theatre, London, The Queens Theatre London and the London Regent Theatre.

Protégées of Barry Jackson include John Gielgud, Cedric Hardwick, Gwen
Ffrancon Davies and Scott Sunderland amongst many other well-known actors and actresses in his lifetime.
Barry Jackson was knighted in 1925.