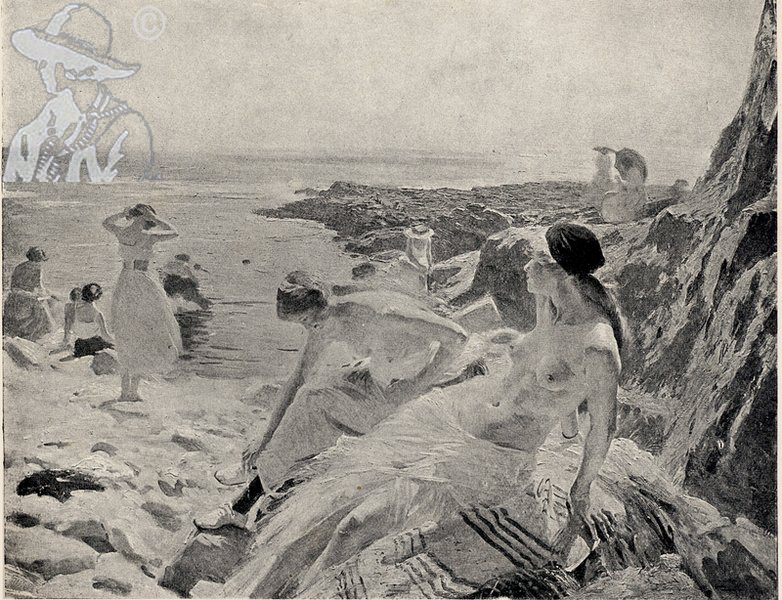 Daughters of the Sun was the largest canvas Laura ever painted at the time.
The nude models were hired from London and they posed for the picture on the rock beyond Lamorna Cove. MOAL p. 139.
The models in the initial studies were two models hired from London, one of whom was a fair headed model whose beauty Laura was most impressed with and whom Laura said inspired the big picture. However the two models caused local problems and Laura had to pack them off back to London and had to use other models to finish the picture.
Laura was not satisfied with the first study and destroyed it.
Laura said that reversing the usual methods of painting sunlight, she made the direct light cool and almost colourless; in the reflections from the rocks into flesh shadow, fullest warmth and colour was given OPGP p 176.

When it was hung at the Royal Academy in 1911 the asking price was £600, and Laura would not accept a much lower price.
During World War 1 the work went on the rounds of Provincial Galleries and as a result became so badly damaged that Laura felt that there was no hope in repairing the great work. It had been left out in the rain for a long time, it was split all over, the paint had lifted from the cloth and its handsome frame almost crumbled away.
Laura kept it for many years face to the wall, but in 1936 she very reluctantly decided that it had to be destroyed as completely unrepairable. “I felt a murderer” OPGP p. 176